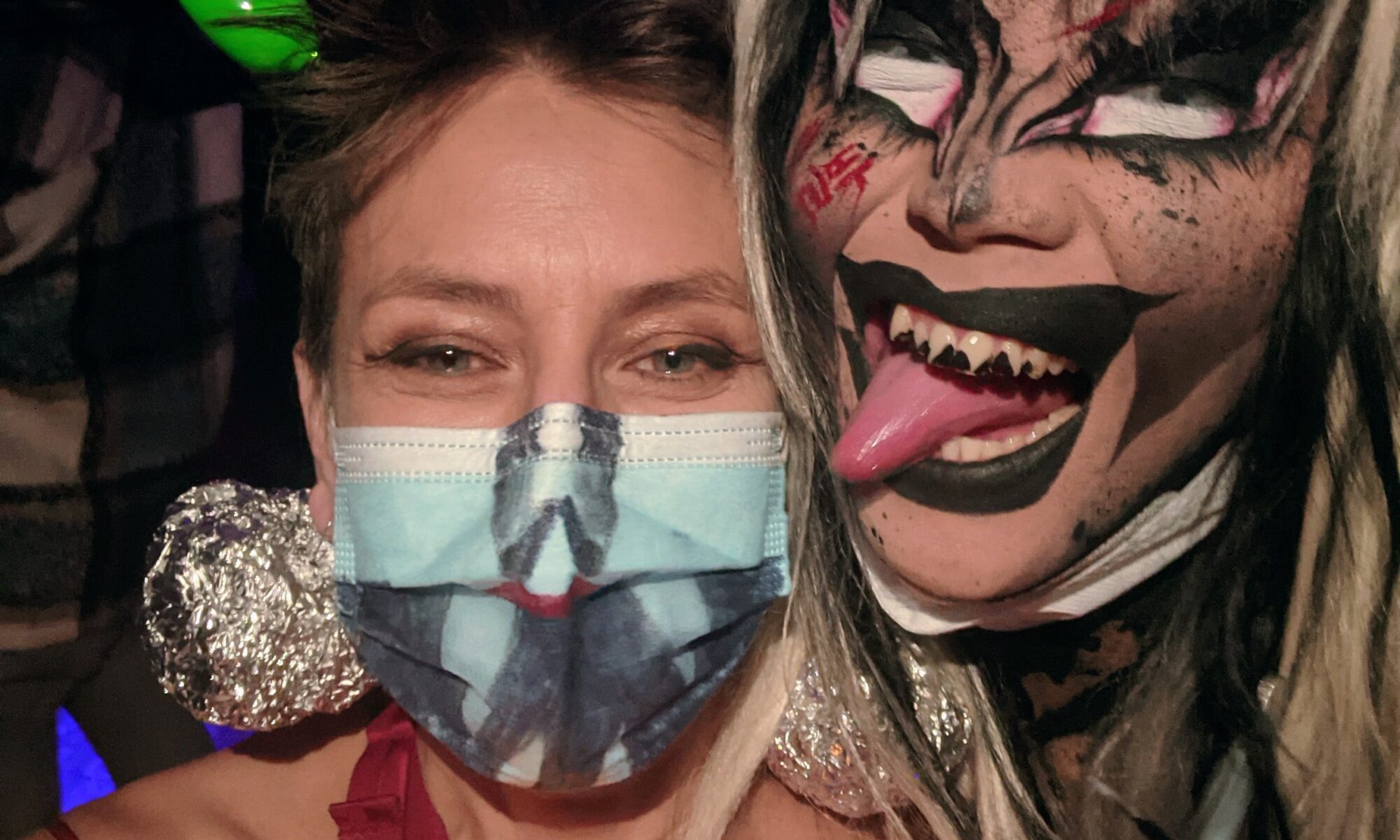 This is the name of the show I went to last night at Q that featured a glimpse of Hoso from season IV of Dragula, hosted on various platforms by the Boulet Brothers. I became an accidental fan of the show when a friend suggested it as an alternative to the more mainstream Drag Race hosted by RuPaul. Where RuPaul seems to be pushing into mainstream with efforts like AJ and the Queen and appearances in blockbusting films, Dragula's monsters push further out.

What does this have to do with a relatively fashion challenged middle age white lady?  I don't know!!!

Let me try to make sense.

Since puberty I have with varying degrees of intensity resisted the narrow confines of gender roles assigned to me. I am not queer in terms of sexual orientation but in terms of gender expression, well, I have tried to avoid that all together, which is part of what drew me to contemporary dance where I can be a bug or a base or simply extended mass. So why am I attracted to the hyper femininity of drag?

I think I am attracted to the magical, medicinal, skillful ability to switch codes that is present in spades in drag.  I remember an ad for Rockport shoes a long while back that featured Rupaul as a very manly man in a suit with facial hair and comfortable shoes. Upon googling, the copy says, "I am comfortable being a man."  And he is every inch the man. That ad stuck with me for years because it is so completely on the opposite end of the gender expression spectrum in relation to most other images I have seen of him. In the hands of a master, gender expression can swing as wildly in a single sentence or be present in different form in the same body at the same time. You know what I'm saying. (The voice on my google maps started swinging mid sentence. Is that happening for other people?) Anyway, I have profound admiration and respect for those who wield their expression consciously with such skill. In my mind they are gender ninjas plying the weapons used against them to tease out nuanced cultural commentary and critique.

I often refer to Bordieu's idea of habitus, which struck me over the head during grad school. Paraphrasing 1000 pages briefly, he's talking about the durable patterns of relationships and social behaviors that form the basis of society. This includes the good and the bad, though we may not be able to see the true nature of any of it in the way that that fish don't see water, to quote a common metaphor. So when we have a structure like racism, it's is beyond difficult to break because we have swum in its currents since before birth. Multiplied by generations, it might as well be a gene passed down, ineluctable. Same applies to gender norms etc. Except...

When I see the slippage between the ultra feminine and the ultra masculine, as in the body of drag superstar RuPaul, I become viscerally hopeful. It's not an abstract hope that entertains my mind, but a precognitive bubbling not so different from physical attraction. Still trying to figure it out, but I guess it is a hope that the walls of the habitus can be successfully breached. When a person can shift and signify other than what they are assigned to be, and my own body recognizes them for what they portray, it gives me hope that other walls can be breached, that we might apprehend the water we swim in, that I might breach my own walls.  These are not new ideas. Here is an article by Zena Bibler on her experience of what disorientation can do while participating  in mayfield brooks' workshop, Improvising While Black. And I think I am just now understanding the title of professor Thomas DeFrantz's ouvre entitled Slippage.  There is also an element of this in the chapter on colonization in Randy Martin's Critical Moves, where technique is likened to the state colonizing the body.  He posits that the ability of dancers to move from one class to the other feigning absolute loyalty with their bodies to whichever teacher/choreographer/authority is in front of them at the moment offers a possibility to theorize resistance (to the state). (Here is an article fromFen Kennedy, a teacher of social dance forms in which they are questioning non-adherence to the norm of a form.)

I guess what is interesting me at the moment in relation to last night is how these slippages are all specifically of the body. A key to me undoing any of the crummy architecture of the social fabric that surrounds and runs through me is to put my body in disorienting situations in relation to others and listen deeply to what it says. It is not always comfortable. In fact, I wonder if the subtext of that Rupaul ad is really, 'This suit and this ultra masculine stance is uncomfortable as *9%^ on me but I'm going to perform it better than you ever could so that you don't dare come at me when I switch.' It's a window into resisting, a fingernail under the edge of the facade of what is; never mind that the nail is a press on.

So, it was at times uncomfortable to be there last night. Not because anyone made me feel uncomfortable or unwelcome. On the contrary I felt quite comfortable in that sense. It was the dancing. As a dancer, I generally let loose after a few songs and do my postmodern thing regardless of what everyone else is doing. Last night I was on pause, watching and feeling that  unusual sensation of being of the 'non-dominant' group in a deeper way than usual. I felt men's eyes on my body in a way that I'm not used to as an aging woman. Were they trying to discern my biological sex? It was a subtle experience of 'being seen' in a context where my orientation, age and to some extent, race were not the dominant presence. I seek this kind of experience but don't find it every day. Out of that visceral, tangible sense of, 'We are not in Kansas anymore Toto!', I felt senses firing that otherwise lay dormant. Out of this comes questions that bubble up from the bottom up rather than top down: what is the way I should move my hips here? do they think my friend is my date? are they looking at me because I am a woman? are they checking me out because they think I'm out of place or do they actually like my dancing, my costume?

Is this how people of color must navigate the world all the time? With their bodies constantly percolating questions like; why is this person being nice to me? or am I safe here? I have listened to people describe what it's like to move through the world in a black body. I have intellectually and empathetically attempted to fathom what that is like. I will never know what it's like in the same way that the person in David Chalmers thought experiment regarding the hard problem of consciousness will not know the color red unless he experiences it with his body, despite all the scientific description and poetry in the world. This is why it's valuable to be physically disoriented in a social setting. The disorientation of being in a space where my cultural markers are non-dominant can shift my perspective just enough that I can conceive that there might be some other paradigm out there besides the one I swim in. I need to regularly put my body in places where I don't know how to read or be read in terms of social communication and where/how I fit in. Then the questioning can begin from a physically grounded perspective.  Be suspect of any other kind.

On a slight tangent, the only place I want to take notes on how to be womanly is in places like the Q. This array of self possessed, slipping, code switching queens and queers have consciously developed, displayed and performed a multitude of ways to express the feminine that resist the dominant cultural habitus. I think it's the fact that their affects are to some extent chosen that makes them feel safer and more desirable to me than the unconsciously chosen affects that cling to my body.  Am I appropriating their work if I try it on? So.much.thinking.

Then the body takes over, my hips are moving in ways they have not moved since the beginning of the pandemic, from the sacrum down articulating...something. And maybe it was that or the small effort I made with a battery powered costume element that got me invited up to the small platform at the front of the club for a minute.

The thong clad young man who invited me up had questions in his eyes, and so did I. Our eyes locked and the questions flew like sparks: what do we do in this situation where our placeholders in this world don't normally interact? where is the power here? who are you to me? what are we/you doing here?  how do I move with you? do you want me to be here? what do you expect of me? am I being myself?

In conclusion, muchas gracias to the Q and performers for bringing to the surface of my body these questions that should always be there.

PS. Send references if you have any that relate! 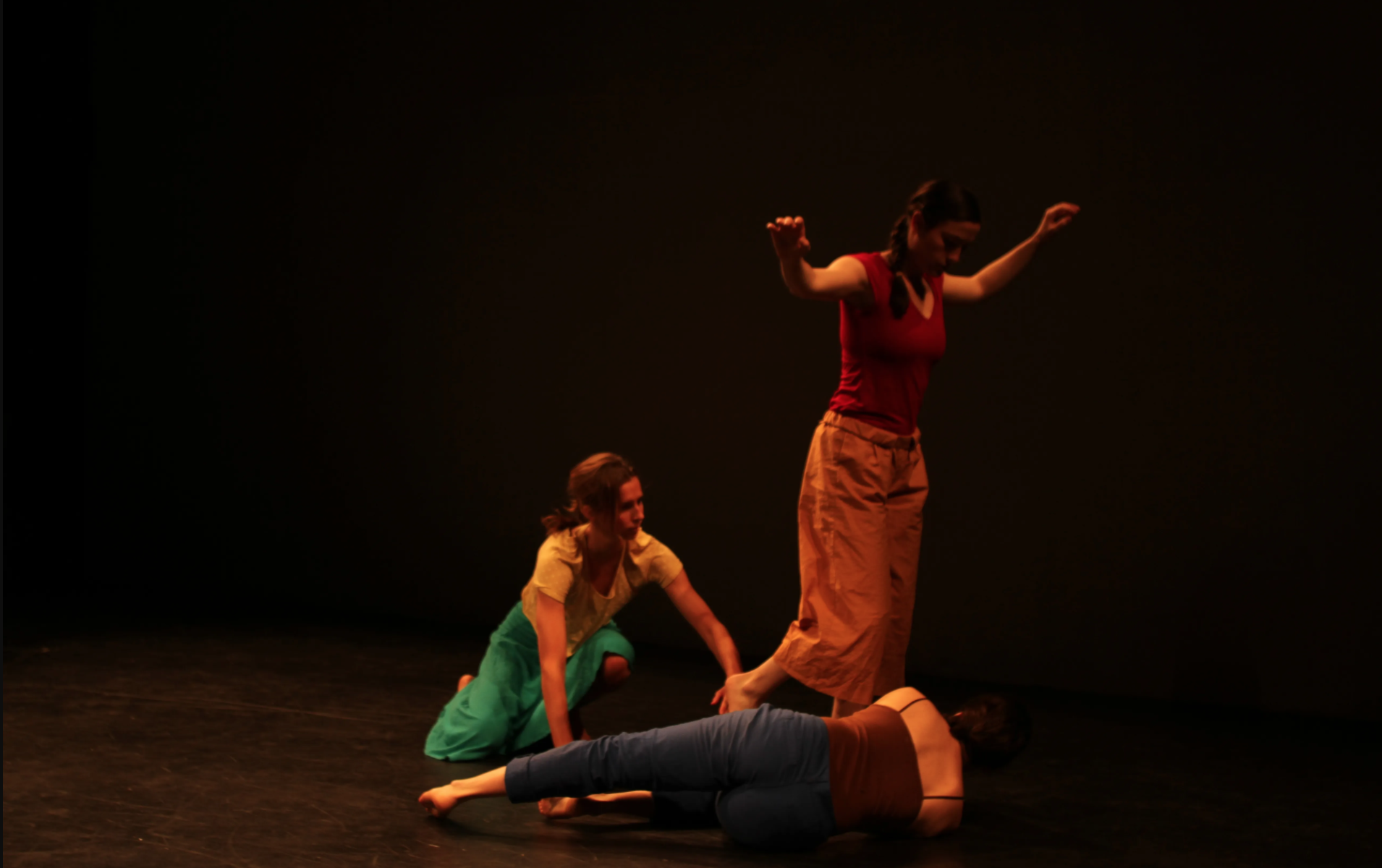